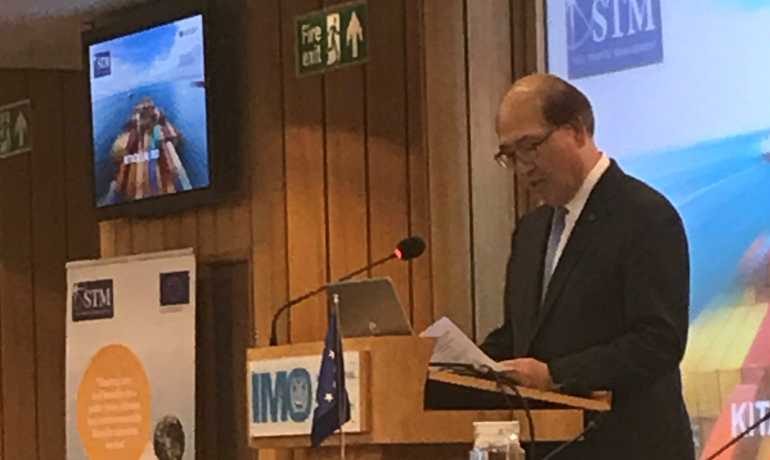 During the STM Validation Project Final Conference at the International Maritime Organization, IMO, in London November 13-14, the IMO Secretary General Kitack Lim expressed his support of STM: “STM goes hand in hand with IMO goals.” Newly appointed EU Coordinator for Motorways of the Sea, Professor Kurt Bodewig, and other EU officials said that STM is a pillar for the EU strategy and that the 20 million euro invested in the project is a good investment. At the conference representatives for nine industry actors also expressed their intention to take responsibility for the technical governance of the digital Maritime Service Infrastructure, developed within STM.

“I give my full support to STM.” IMO Secretary General Kitack Lim was very explicit in his opening keynote speech at the STM Validation Project Final Conference. “STM goes hand in hand with the IMO objectives, and I encourage the STM Validation project to submit its results to IMO at the next possible committee meeting.”

Other keynote speeches were made by Professor Kurt Bodewig, the EU coordinator for the Motorways of the Seas, the maritime dimension the EU transport corridors and by Jaroslav Kotowski, Senior Project Manager of INEA, the executive agency of the EU. Kotowski hailed the ideas and progress of the STM initiative and said: “Sea Traffic Management is a pillar in the European maritime strategy”. Professor Bodewig emphasized that Motorways of the Seas should improve Short Sea Shipping and integrate even more with the land-based corridors. Multi-modal integration where ports and information sharing are important. This is a perfect fit with STM-enabled services and solutions. Professor Bodewig concluded “The EU has invested 20 million euro in the STM Validation project and it is a good investment.”

The conference attracted more than 350 people. High level project results were presented and discussed in panels focusing on safety, efficiency and environmental aspects. Ten demo stations spurred engaging discussions in hour-long networking breaks giving the participants a chance to get a full understanding of operational STM services, the underlying infrastructure, the benefits and possibilities. Seeing is believing. Here is the program and links to all presentations.

Nine industry actors launched a common initiative with the intention to take the responsibility of the technical governance of the underlying digital infrastructure from being project-driven to be long-term operational. This demonstrates clearly that important industry players see commercial opportunities based on STM and believe that it is time to take the concept another step towards full global interoperability.

The delegates were really engaged in how shipping can contribute to reduce greenhouse gas emissions in order to stop global warming. The STM results presented, indicated high saving potential for all ships based on operational efficiencies due to better information sharing between ships and ports. This would be a major contribution to reaching the IMO goal of reducing CO2 with 50% by 2050.

Here is the program.