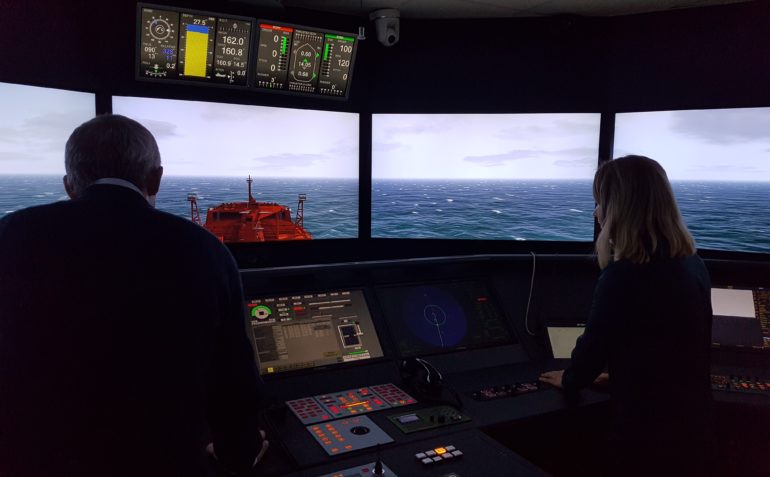 The European Maritime Simulator Network (EMSN) allows simulators of different brands at various sites to be connected. Joint exercises can be performed by people in different countries in real time. In October the EMSN was used for the first time for joint training in Search and Rescue (SAR) among professionals from different organisations and students, from three Nordic countries.

“It was an interesting and rewarding exercise. The Swedish Coast Guard is often appointed OSC in SAR cases but as I work at one of the coastguards’ smaller vessels these searches mainly involve small pleasure boats, which can quickly manoeuver and change direction. However, coordinating a search among 13 large commercial vessels, like tankers, requires another way of thinking because of their sheer size.”

“To connect different entities in this way is really exciting; you get a very realistic exercise with different dialects, language problems and audibility issues on the VHF.

At 10:30 the 225-metre bulk carrier Hermes finally found a person in the water straight ahead of the ship. The person was alive and waved in response. At 10:32 a MOB boat was prepared for launch. JRCC ordered the helicopter unit to stand by and shortly afterwards the man over board could be taken into the MOB boat, cold but alive.

During the debriefing following the exercise, the lessons learnt were discussed and summarised. All participants had been well prepared and the exercise was conducted in a satisfactory manner.  Radio communications worked well but could be further improved by using shorter messages and adhering to correct terminology. With the involvement of more countries and nationalities in SAR operations, this will be even more crucial to avoid misunderstandings.

The exercise in brief