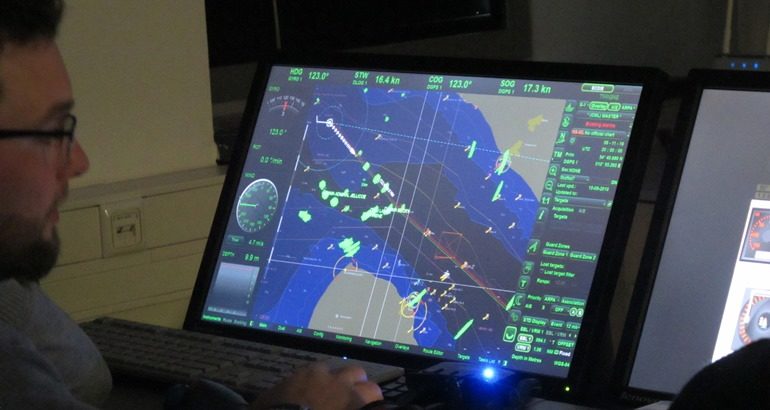 “STM simulations are very realistic and superior to other exercises”

Matthais Pfeiffer and Adrian Ludwig (picture) are happy to participate in the STM simulator runs. “We want to support STM tests and enhance our own knowledge”.


Maybe you will join during the simulator runs in March and June? Apply here!

The Fraunhofer Center for Maritime Logistics and Services (CML) in Hamburg is involved in the European Maritimen Simulator Network (EMSN) test runs with three ship simulators. During the second simulation week of the Sea Traffic Management (STM) Validation project, more than 10 navigators were visiting to take part in the manoeuvres.

In addition to the actual exercises, driving on a given route and performing the necessary radio communication with other bridges and the VTS, the human factor is an important criterion. That’s why CML takes also part in the human factor observation. During each simulation run – there are two performed each day – the participants are asked to document their experiences using a questionnaire. At the same time, the participants are observed from the outside. Angelo, a student researcher from CML, observes the officers and documents his impressions of communication and stress levels, as well as the behavior in challenging situations. His observation: If the participants are at first relaxed and a bit excited, they become professionals after 10 to 20 minutes on their bridge and steer their ship confidently. Overall, the human factor observation will give valuable hints on the kinds of nautical situations that are identified as being critical by most of the participants. This information hepls the developers in setting reasonable accents in their solutions.

When asked if the work on the bridges at CML was realistic, Matthias Pfeiffer, deck officer on bulkers, replied that the equipment at the CML was very professional and realistic. He praised the complex setup, which is with nearly 30 vessels engaged superior to the exercise scenarios at university.

His second in command today, Adrian Ludwig, deck officer on container ships, confirmed that the EMSN works very reliable and is equally enthusiastic about this particular type of European cooperation and digital possibilities.

Both Matthias and Adrian are sailing in the practice areas of the English Channel and Southern Baltic Sea in their real job, on large freighters, and confirm that both the volume of traffic and the cooperation with VTS are very close to reality. And they are happy that it has finally been possible to participate in these simulator runs. Many nautical officers know about the test runs in STM and want to support them, also in order to enhance their own knowledge, but of course a test run must coincide with a home leave.