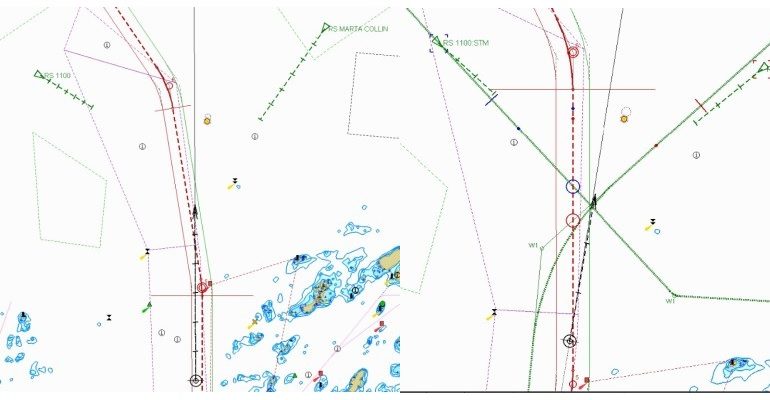 The route message format used – developed as a part of the STM Validation project – is transmitted to other ships via conventional AIS, improving the overall situational awareness. The officer of the watch can view up to seven route segments of other ships, allowing him or her to predict meeting points, determine the closest point of approach (CPA), when it will happen and, at an early stage, identify and avoid close situations. It will be very useful for ships in narrow channels and fairways with limited manoeuvrability.

Stena Germanica, while on route from Gothenburg to Kiel, automatically shared her route with the two rescue vessels, and at the same time received their routes and displayed them on the ECDIS.

The pictures are displays on “Stena Germanica” outbound from Gothenburg. They show two AIS targets: ‘RS 1100’ on portside and ‘RS Marta Collin’ on starboard side. The left picture is the normal presentation of own ship, monitored route and the two AIS targets. The right picture includes STM-functions. It also shows the two routes from the AIS targets. The STM ECDIS predict intersection points between ships route and CPA. A short blue perpendicular line indicates where ‘RS 1000’ will be on her route when “Stena Germanica” will be in the blue circle intersection point. The two small blue dots on the routes represent the CPA position of the two ships. The intersection point and CPA position displayed for ‘RS Marta Collin’ is displayed in a different colour – red.

“Through information-sharing between ship and shore using the Maritime Cloud/ SeaSWIM infrastructure, we are creating a cohesive community, which enables better communications and joint decision-making. This leads to higher operational standards, enhanced environmental performance, increased efficiency and improved safety record.”

“During the tests, the routes were planned in advance and sent to the rescue units. This route sharing operation is very simple with the STM infrastructure and can be useful in real rescue operations. The capability to broadcast and share transport- and entry-routes into an area as well as routes for search patterns is a great improvement. It will simplify communication, make SAR-operations more efficient and hopefully save more lives.”

The STM test beds will include 300 ships, 13 ports and at least 5 shore centres.