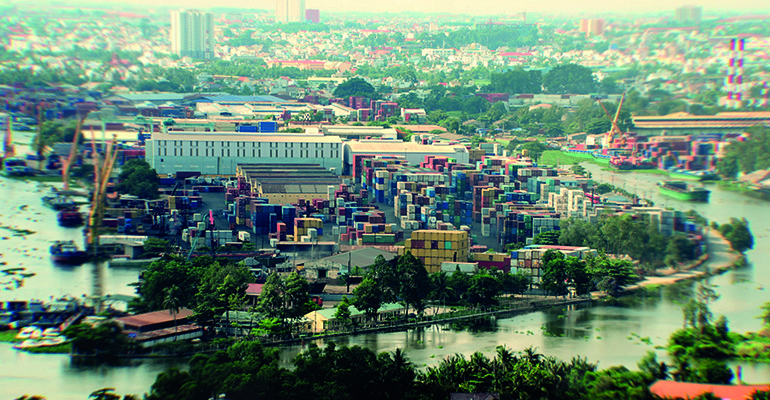 The Port Collaborative Decision Making concept, PortCDM, was defined as part of Sea Traffic Management in the MONALISA 2.0 project. By introducing PortCDM, port call performance is expected to increase by enhanced coordination ability among port call actors involved and thereby reduce the turnaround time. This is based on systematic sharing of standardized time stamps in the current system environment within the port as well as with shipping lines, other ports, and hinterland actors. Now the KPIs for Predictability and Punctuality have been defined in detail, which will help ports measure improvements and perform benchmarks with peers.

Huge potential
As an average for ports in the world, it has been estimated that the port visit duration time could be decreased by 25% if just ports were better coordinated, e.g. by using PortCDM. Consequently, there is a savings potential of up to 25% in vessel turnaround time, if realised consistently across all ports of a specific line’s service rotation. It will enable a shipping line in many cases to save one vessel, which translates into huge CAPEX savings for shipping lines.

PortCDM – the benefit of shared time stamps
A common situation is that vessels arrive according to plan, but the port is not ready to serve the vessel. Imagine when everybody involved in port calls can synchronize their actions based on keen insights into other actors’ plans and outcomes. For example, the tug boat organisation could plan the distribution of the use of tug boats more accurately than is currently the case based on actions planned for or taking place in the terminal; berth planning could be done precisely, based on continually updated information on the vessel’s arrival and actors’ capabilities of serving the vessel; that the vessel’s arrival at the port is synchronized with the port’s ability to serve the purpose of call; and that safe passages within the port area can be planned for given planned arrivals and departures.

In PortCDM, as one of the concepts of STM, enhanced coordination based on situational awareness is made possible by time stamps being shared in real time. These time stamps are based on different states (i.e. planned, estimated or actual events) that are associated with the port call process constituting the basis for (distributed) coordination. In the figure below, a generic set of states are depicted to indicate what is important to focus on for enhanced coordination. Based on the specific circumstances in each port, a selection of these states is chosen as the basis for coordination.

• Duration time of the port visit, i.e. from arrival to departure, and the different sections of the visit divided into e.g. movement time, berth time, waiting time etc. – HIGHER PRECISION

The first five of these measures are possible to derive from shared time stamps, as e.g. predictability as being an expression of the deviation between reported estimates and reported actuals of selected states, or berth productivity as the relationship between the time of cargo operations (captured by cargo operations commenced and cargo operations completed) divided by the time at berth (captured by arrival berth and departure berth – see the figure for the calculation of waiting times). The last one requires some additional information on available resources.

Historically actual states (what has happened) have been used for measuring port call performance; but by sharing estimates systematically when particular events are planned to occur, it also becomes possible to calculate the expected performance. For example, by knowing estimates of when cargo operations are about to occur and the berth window, it would be possible to calculate an expected berth productivity outcome. Not only the actual, but also the expected outcome is thus possible to measure for waiting time, duration time and capacity utilization. Time stamps built around estimates are what make the new measurements of predictability and punctuality possible. By using the concept of PortCDM, the various actors involved in the port call sharing time stamps among each other would then be able to optimize towards optimal port call performance. During the tests performed at Port of Gothenburg and Port of Stavanger approx. 2,500 time stamps per port were shared among the different actors per day.

What’s in it for a shipping company?
It has been noted that larger shipping companies are capturing, as recorded by the captain, different actuals for the port calls they are involved in, and which are subsequently analysed by the shipping company. This is because there are different interpretations of events such as “vessel alongside” or “lashing commenced”. This is a clear expression of post analytics that potentially would be used both for comparing ports among each other and as a basis for negotiation with the port. It is also an enabler for shipping lines to outsource the husbandry of the vessel to specialist service providers around the world. PortCDM would support such development but also enable different port call actors, including the shipping company, to proactively take corrective action before the outcome is a fact.  Situational awareness based on the PortCDM concept should allow the stakeholders involved to coordinate in time and space in relation to other actors’ plans and performances.