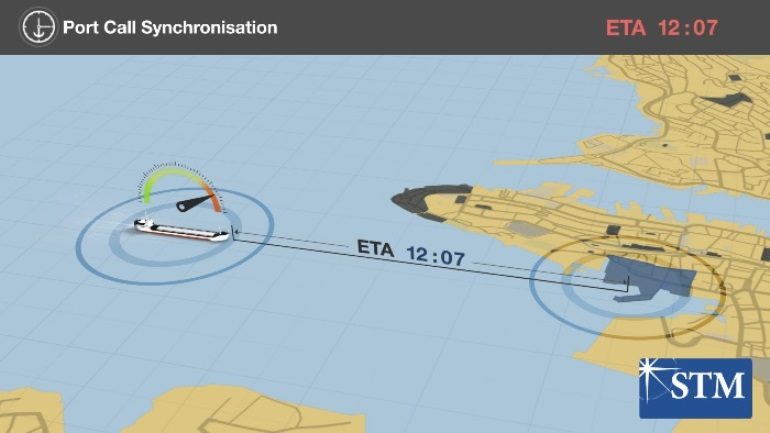 Sea Traffic Management, STM, and Port of Rotterdam have established electronic exchange of arrival times between ships and port. 300 ships in the STM Validation Project are thus able to share their voyage plan schedules, directly from their ECDIS/navigation system, with Port of Rotterdam electronically. This will improve the quality and predictability of arrival info in port systems and onboard navigation systems. Updates of planned arrival times are shared automatically, which reduces the need for manual communication. When the port authority adjusts the planned time of arrival, the update is automatically transmitted to the ship and displayed as a text message onboard.

However, STM is about standardization rather than specific solutions. Integration with the Port of Rotterdam re-uses the same standard data formats, APIs and authentication mechanism via the Maritime Connectivity Platform, like many other services in the STM project. Several leading ECDIS and VTS system providers already support these standards in their products. Integration with systems in other ports is therefore simple.

“We use the same components again and again; integrating with an existing system is a matter of weeks. We are here to help,” says solution architect Per Löfbom at the Swedish Maritime Administration.

“Port of Rotterdam is one of the leaders in digitalization among European ports and the cooperation is highly valued by the STM project. Many ships in the STM project call Rotterdam regularly, and having the biggest port in Europe connected to STM adds to the usefulness for participating ships,” says Per Setterberg, operational project manager for the STM Validation Project.

“For speeding up digitalization in shipping, it is vital that multiple initiatives like STM, the International Taskforce Port Call Optimization and leading providers of, e.g. ECDIS and VTS systems, start promoting uniform industry standards,” says Ben van Scherpenzeel, chair of the Taskforce.

The STM Validation Project will demonstrate the STM concept in large-scale test beds both in the Nordic and Mediterranean Seas, encompassing around 300 vessels, 13 ports and 5 shore-based service centres as well as using the European Maritime Simulator Network.