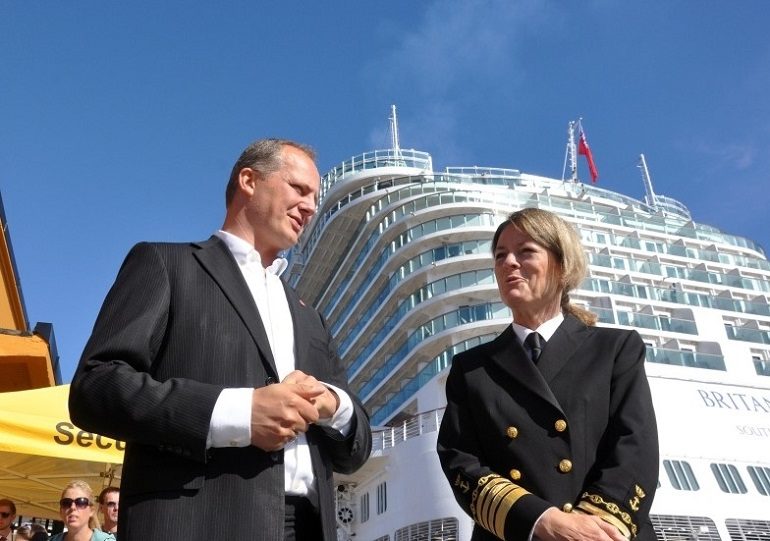 The Norwegian Minister of Transport Ketil Solvik-Olsen logged in and officially inaugurated the Port of Stavanger test bed. All actors involved in port calls share time stamps for planned and actual actions, thus helping each other to the most efficient operations possible during the call. It is collaborative decision making at its best and named PortCDM. Here together with Merete Eik, CEO of Port of Stavanger in front the Britannia, the first ship in test bed and also the venue of the launch event. Thank you, P&O Cruises for welcoming us on board! (Photo: Stein Roger Fossmo)

The Norwegian Coastal Administration (NCA) is a leading actor in innovating the way information is automated, shared and used. The National SingleWindow reporting system is a solution that simplifies ship reporting for all port calls in Norway. By introducing Sea Traffic Management and its PortCDM concept, NCA help the operational side of shipping. “Ports are the next logical step to make more efficient” says Jon Leon Ervik., Head of Department for Pilotage and VTS in NCA.

“Stavanger – the digital port” is the vision of Trond Andersen, Manager Maritime Department, Port of Stavanger and adds “With a new port system integrated with the PortCDM test bed, we give port actors like agents, tugs and mooring companies a better possibility to collaborate and plan. The result is an efficient more predictable port call with lower costs and potentially shorter turn-around times. The international PortCDM standard, and experienced colleagues from Viktoria Swedish ICT and Valenciaport Foundation have saved us time and effort when setting up the test bed here. I believe STM will grow fast; as more and more ports have PortCDM-capabilities; the more ships will demand compliant software.”

Through PortCDM all port call actors will share their timelines – start and finishing time of their operations, planned and actual times – using a standardised message format. This establishes a common situational awareness, minimises misunderstandings, and help actors plan confidently with less uncertainties. In a typical call to a port anywhere in the world, you can get as many different answers as there are actors, when asking for estimated departure time. With PortCDM the inconsistencies are identified and the actors work out the differences in advance, thus eliminating delays and last minute changes.