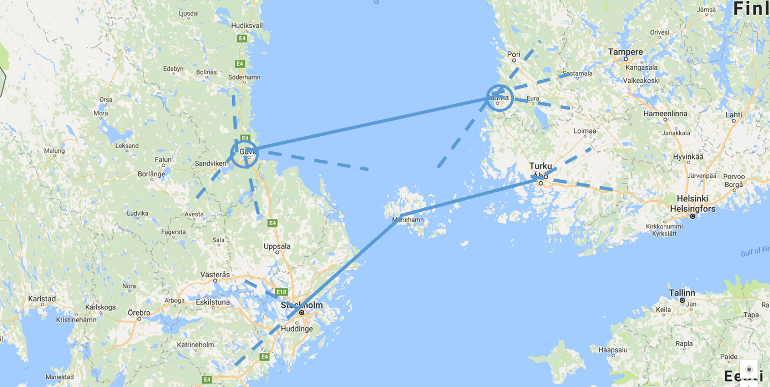 A new Sea Traffic Management (STM) project has received EU funding from the Interreg Central Baltic Programme. EfficientFlow covers many aspects of Sea Traffic Management in the ports of Rauma, Finland and Gävle, Sweden, as well as STM-enabled traffic flow management for the many large ferries that sail through the archipelago between Sweden and Finland. The project will run 2018-2020 with a budget of EUR 4.5 million.

Magnus Sundström, Head of Research and Innovation at the Swedish Maritime Administration, SMA, coordinated the project proposal. “We truly appreciate that the Flow Management part of the STM concept can be tested in a live test bed. Safety will increase even more when ships and VTS Turku work with STM-enabled tools. We also appreciate that STM will be further tested and implemented in ports in the Central Baltic Region. “

Heikki Koivisto, Master Mariner and maritime expert from Satakunta University of Applied Sciences. “The Rauma-Gävle connection is an important trade route and the traffic is increasing due to deepening of the both fairways and investments on the container terminals. Making the ports share information seamlessly will help operations becoming more efficient and more predictable.”

The EfficientFlow project will contribute to more efficient traffic flow in the two ports of Gävle and Rauma as well as in the ScanMed corridor between Stockholm and Turku by implementation of STM and its integration into the full logistic chain. The results will be less manual information exchange, improved processes and practical application of new ICT tools leading to increased situational awareness among the actors in the ports and at sea in the corridors; connected ports and more flexible route planning; improved port-hinterland information exchange; well-coordinated, faster and more optimized port operations; improved just-in-time processes, saved fuel, less waiting times, improved planning horizon, improved berth productivity and increased flexibility in case of non-expected events.

As a result, ships will adjust speed in order to arrive just-in-time, which means making maritime transport more energy efficient, decreases harmful emissions (CO2), provides positive impact on erosion as well as provides safety and socio-economic benefits to the corridors. The risk of misunderstanding and misinterpretation of information will also be reduced, which contributes to reduced movement time of goods in the corridors. The results achieved will last beyond the lifetime of the project and are transferrable to other ports and countries in the Central Baltic area.

Project partners are the Swedish Maritime Administration, Satakunta University of Applied Sciences, Port of Rauma, Port of Gävle and the Finnish Transport Agency.