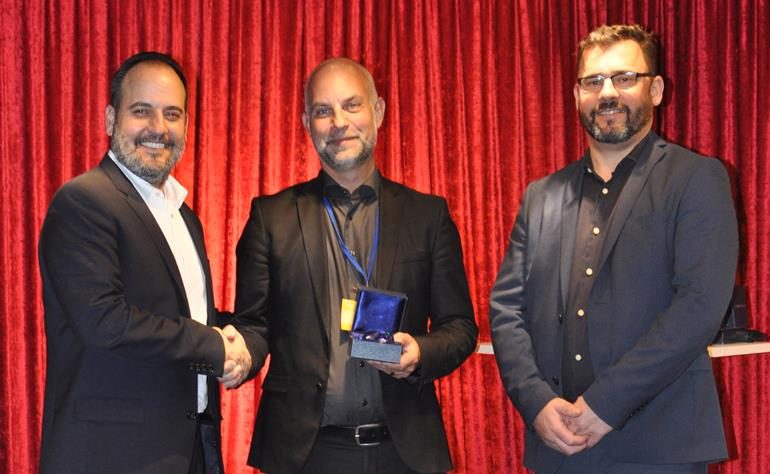 At the Fathom Smart Ships Awards November 29, STM won the Digital Enabler Award. The judges were looking for a nomination that demonstrated a desire to bring shipping and technology forms together in a neutral but potentially positive way. With successful demonstrations behind it, the STM Validation project was a worthy winner in a tough category.

Mikael Lind, RISE, accepting the award from Socrates Theodossiou,Tototheo Group, emphasised in his speech that many regard 2017 as the year when digitalization seriously was brought into the maritime sector creating vast business opportunities through disruptive technologies. Many years of efforts are starting to pay off and MONALISA, MONALISA 2.0 and the STM Validation projects have had a very good timing for providing validation results and industrial engagement in bringing the Sea Traffic Management concepts to the market.

The Digital Enabler Award criteria mentioned, doing the most to enhance smart business solution through partnerships or platforms that others can utilise. The STM validation project was awarded for its successes in drawing in many different industry actors to create improved communication between ships, between port actors and between ships and shore, enabling services that promise significant improvements in safety, environmental performance and cost.

“I would like to congratulate all the winners and all who entered or were entered into these industry awards”, says Craig Eason, Fathom Maritime Intelligence Editorial Director and overseer of the Smart Ship Awards judging panel. He continues, “The judges were looking for a nomination that demonstrated a desire to bring shipping and technology forms together in a neutral but potentially positive way. With successful demonstrations behind it, STM Validation project was a worthy winner in a tough category”.

Mikael Lind, Activity leader PortCDM testbeds in the STM validation project said “It is encouraging to see the influence that STM is having across the world. The open, standardized and interoperable information-sharing model delivers value to ships, ports and goods owners. Ports are the key point in the maritime logistics chain, and the PortCDM-concept within STM, makes ports more efficient and predictable than ever based on enhanced situational awareness shared among involved actors. Savings are shared among all port actors, ship and goods owners. “

STM, with its PortCDM sub-concept, is also nominated for the SMART4SEA E-Navigation Award. Please, help STM win by voting at SMART4SEA Award site.